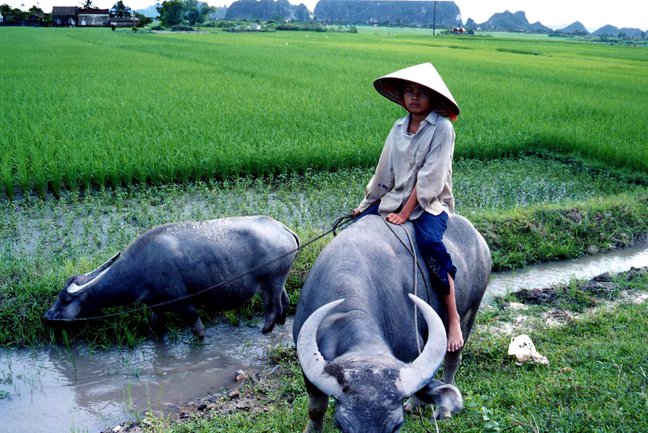 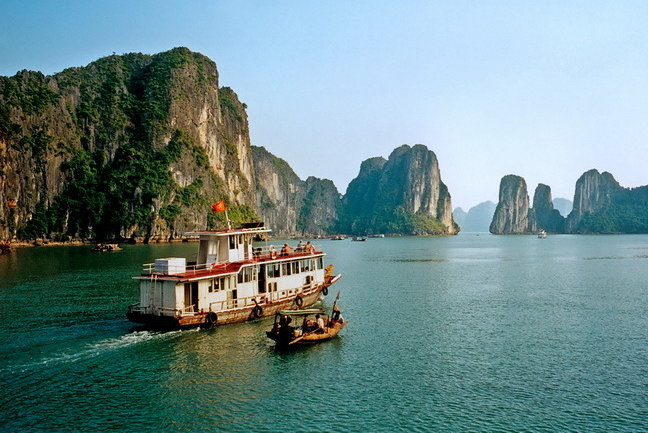 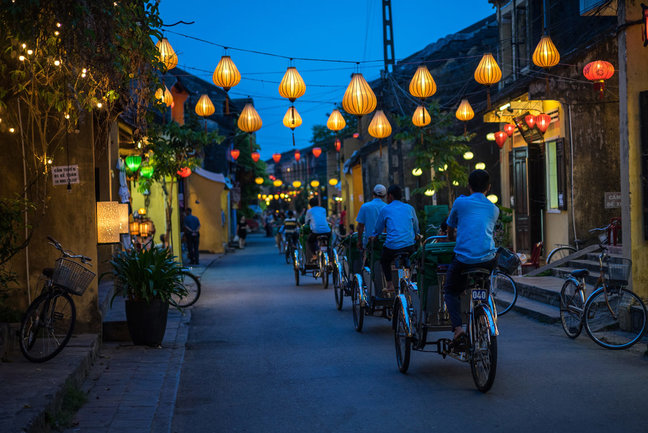 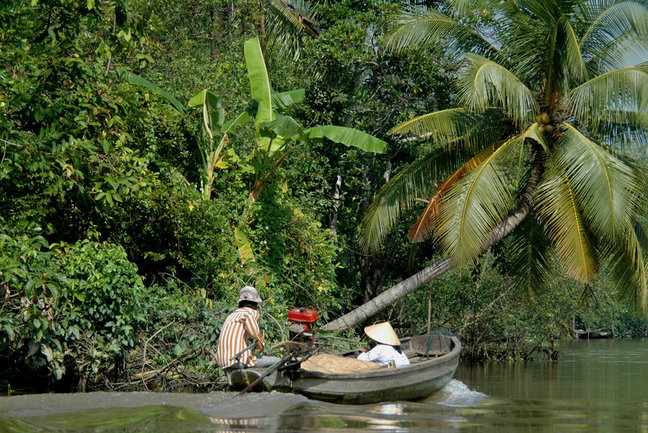 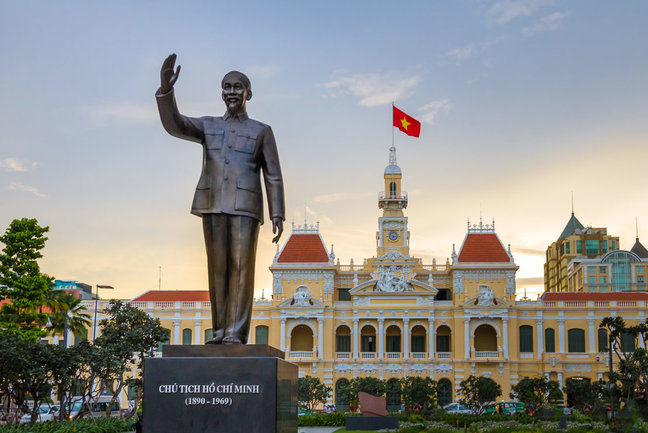 Find out more about the A Flavour of Vietnam

Capture the essence of Vietnam with a comprehensive North to South trip. Immerse yourselves in bustling cities, sail on a junk in scenic Halong Bay, be mesmerised by timeless UNESCO Heritage Sites as well as the picturesque scenes of the Mekong Delta. Share experiences with the local people and learn about their cultures.

A journey through Vietnam from North to South

Capture the essence of Vietnam with a comprehensive North to South trip. Visit the natural splendour of the North, continue to the historic charm of the Central provinces before concluding with the beauty and vibrancy of the South. Immerse yourselves in bustling cities, sail on a junk in scenic Halong Bay, be mesmerised by timeless UNESCO Heritage Sites as well as the picturesque scenes of the Mekong Delta. Share experiences with the local people and learn about their cultures.

Best time to visit: November to April when days are dry with plenty of sunshine. Rain falls between May to September.

Meet on arrival in Hanoi for a private transfer by car to your hotel. (35 km, 1 hour)

Cruise aboard the Indochina Sails Cruise through Halong Bay.

Board Indochina Sails at around midday. Enjoy a welcome drink while attending the safety and boat orientation briefing. While a multi-course lunch of Vietnamese and Western food is being served the boat starts cruising through Bai Tu Long Bay and Halong Bay to Cua Van Fishing Village, which consists of 600 residents living in about 150 floating houses. Kayak through the village yourself, or sit back and relax on a small bamboo boat (sampan) rowed by a villager.

Back onboard there will be a cooking class demonstrating how traditional Vietnamese food is prepared - with the option to taste, of course! Then relax with a happy hour drink before feasting on a sumptuous dinner buffet. After dinner activities include another happy hour, playing cards, massage and squid fishing.

Overnight on the junk.

Join in the early morning Tai Chi lessons before leaving the boat for a walking tour of Titov Beach Island. You will have time for a climb up the steps to the peak for a breathtaking 360- degree view of the Bay and relaxation on the beach.

Back on board it’s time for final packing and freshening up before enjoying a full breakfast buffet, including traditional Vietnamese Noodles (Pho). After breakfast guests may relax in the dining room and lounge or on the deck enjoying the last Bay views before disembarkation at 11:00 am.

In the evening, transfer to the theatre to enjoy Hanoi’s famous water puppets show. Afterwards, transfer to your hotel.

Begin your day visiting the Temple of Literature, a peaceful series of walled courtyards and graceful gateways, and one of the best surviving examples of traditional Vietnamese architecture. Founded in 1070 and dedicated to Confucius, this was also the site of Vietnam's first university.

Continue to the miniature One Pillar Pagoda. Stroll past the Ho Chih Minh Mausoleum where visitors can pay respects to the embalmed body of Ho Chi Minh. Continue through the park to Ho Chih Minh's Stilt House.

Finally, discover the Old Quarter of Hanoi. This fascinating network of narrow alleys and shophouses is also known as 'The 36 Streets,' each street being named after the merchandise traditionally sold there, ranging from fabrics, crafts, medicines and tombstones. A handicraft lover's paradise and an endlessly interesting place to explore local life.

Travel to Hoa Binh and Mai Chau provinces, the beginning of the north-west highlands, and home to many different ethnic minorities. First stop is the Muong village of Giang Mo in Hoa Binh. This small village of traditional stilt houses is nestled among rice paddies against picturesque hills. Continue into Mai Chau province along scenic rice paddies to LAC Village, inhabited mainly by White Thai. Sightseeing in Mai Chau.

Travel to Hoa Binh and Mai Chau provinces, the beginning of the north-west highlands, and home to many different ethnic minorities. First stop is the Muong village of Giang Mo in Hoa Binh. This small village of traditional stilt houses is nestled among rice paddies against picturesque hills. Continue into Mai Chau province along scenic rice paddies to LAC Village, inhabited mainly by White Thai. Sightseeing in Mai Chau.

Drive to visit Buoc village which is one of the most beautiful white Thai ethnic villages. Walk around the villages of Lac and Pomcoong to experience the daily life of the White Thai minority.

Drive from Mai Chau to the Hmong village of Xa Linh and Pa Co.

On arrival in Hue, your driver and guide will transfer you to your hotel. (15 km, 30 minutes)

Established in the 17th century, Hue served as the capital of Vietnam for more than 140 years. It houses ancient temples, imperial buildings, and French-style edifices.

Visit the Old Imperial City, located in the heart of Hue is the IMPERIAL CITADEL, a vast complex built in the early 19th century and modelled after the Forbidden City of Peking. The original walls stretched for 10 km and were surrounded by a wide moat. Today, most of the buildings have been destroyed due to bombing during the Vietnam-American War, but the monuments that remain provide a fascinating glimpse into the court life of the Nguyen Dynasty.

Approach the city past the striking Flag Tower to the imposing Nho Mon Gate, the main entrance to the Imperial Enclosure. Enter into an area of spacious courtyards and serene lotus ponds, and visit Dien Tho Palace where the Queen mother lived, Thai Hoa Palace, the magnificently decorated reception hall, the Halls of the Mandarins and the original Nine Dynastic urns.

Visit the Imperial Tombs of Tu Du and Khai Dinh. Venture into the countryside around Hue to the Imperial tombs of Tu Duc and Khai Dinh. Tu Duc, the longest reigning Vietnamese emperor, designed and built this elegant tomb during his lifetime, using it as a retreat for meditation, reading and theatre performances. Take some time to soak in the tranquil atmosphere, wandering among the gracefully proportioned pavilions, courtyards and lotus ponds.

Afterwards, visit the Imperial tomb of Khai Dinh dramatically located on a hillside. The last of the monumental tombs of the Nguyen dynasty, completed in 1931, this tomb incorporates distinct European elements into the traditional Vietnamese architecture.

Enjoy a leisurely boat ride down the Perfume River, stopping first at the iconic Thien Mu Pagoda, an elegant seven-tiered octagonal tower which has become Hue's most widely recognisable monument. Continue cruising into the countryside to the Imperial Tomb of Ming Mang, a majestic complex of courtyards, pavilions and temples in a beautiful natural setting.

Drive over scenic mountainous roads with spectacular views over the coastline. Halfway between Danang and Hue lies the dramatic Hai Van Pass, the high dividing line between the climate zones of North and South Vietnam. Continue southwards passing Lang Co, a lovely stretch of beach curving outwards between a clear blue lagoon and the South China Sea. After arriving in Danang, tour the Cham Museum, an elegant colonial building which now houses the finest collection of Cham sculpture in the world.

Continue south to Hoi An, stopping en route to visit the Marble Mountains, five stone hillocks, once islands, that now rise sharply from the surrounding rice fields. Riddled with caves and shrines, they are said to each represents one of the five elements of the universe.

Overnight in Hoi An.

Day 11: Sightseeing in Hoi An

The exquisitely preserved merchant town of Hoi An is a UNESCO World Heritage Site. It's colourful shop houses and temples reflect a diverse heritage, dating back to the 16th and 17th century when it was a major port for Western, Chinese and Japanese traders. Today it is a thriving centre of traditional crafts and a shopper’s paradise, best explored on foot.

Wander through the cobbled streets, past low tile-roofed buildings, the bustling central market and the small harbour where colourfully painted boats are moored. The walking tour will include visits to a private house, where members of the same family have lived continuously for centuries in a traditional setting; to one of the family chapels built by prominent merchants or official families as centres for ancestor worship.

Visit the famous Japanese covered bridge, first constructed in 1593 by the Japanese community of Hoi An to link the town with the Chinese quarters across the stream. In the afternoon, board a local boat and cruise down the Thu Bon River before returning to Hoi An harbour.

Overnight in Hoi An.

Fly to Ho Chi Minh City. On arrival, your driver and guide will transfer you to your hotel. (15 km, 20 minutes)

Begin with a tour of the historic centre, strolling along Dong Khoi Street, formerly known as the Rue Catinat, the main shopping thoroughfare and heart of old colonial Saigon. Pass by classic European-style landmarks such as the ornate City Hall (Hotel De Ville), the old Opera House and pay a quick visit to the neo-Romanesque Notre Dame Cathedral and the Central Post Office.

Afterwards, dive into modern history with a tour of the Reunification Palace. Formerly the Independence Palace of the South Vietnamese president, this 60s style building was famously stormed by tanks signifying the fall of South Vietnam. It has been preserved in its original state, and the original tanks remain on display near the entrance gates.

Continue to the harrowing War Remnants Museum, which comprehensively documents the travails of the long Vietnam - American War. Inside are detailed photographic exhibitions; outside is a collection of tanks, planes and weapons. A powerful experience, this museum is guaranteed to provoke strong emotions. Finally visit the Emperor of Jade Pagoda, one of Saigon's most interesting pagodas.

Day 13: A day trip to the Mekong Delta

Take a boat trip on Mekong River to Ben Tre where local handicrafts and sweets from coconuts are produced. Enjoy fresh seasonal fruits, a performance of traditional songs, and observe the local life. Take a short ride on a horse carriage to a typical local house to taste some homemade honey-tea. Proceed by a small sampan boat through the small canals and observe daily life along the riverbanks, stopping for a leisurely stroll.

Day 14: A day trip to the Cu Chi Tunnels

From Ho Chi Minh City, drive to Tay Ninh, the birthplace of the unique Cao Dai religion, a fusion of Buddhism, Confucianism, Taoism, Christianity, Islam and Vietnamese spiritual beliefs. Every day at noon, worshippers garbed in colourful robes flock to the Great temple to participate in the daily prayer sessions which visitors may respectfully observe from the upper balconies.

Afterwards, continue to the Cu Chi Tunnels. Never discovered by American forces, these tunnels were an important Vietcong base during the American War. Stretching over 200 km, this incredible underground network, dug by hand out of hard laterite, connected command posts, hospitals, shelter and weapon factories. Today, you can walk through the area and learn about the day-to-day life of the VC, see the cleverly disguised entrances and elaborate booby-traps, and even venture inside the tunnels, some of which have been modified to accommodate tourists.

Drive to the airport for a flight to your onward destination. (15 km, 20 minutes)