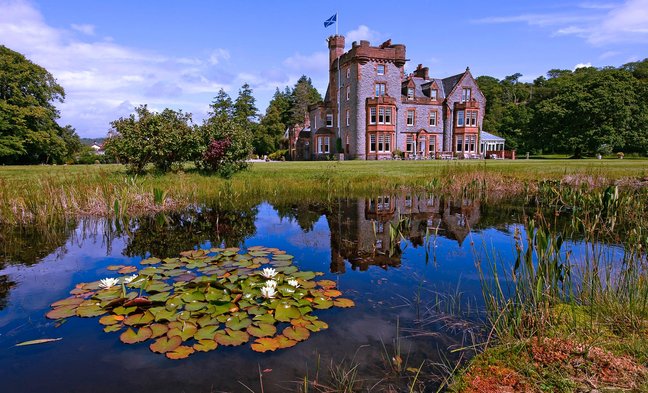 Find out more about the Aston Martin Weekend

Spoil yourselves 007 style with an Aston Martin and five star hotel on its own private island. This holiday captures the style and glamour of the films, and lets you enjoy the thrills of driving a stylish Aston Martin around some key locations associated with them.

“We turn off the motorway near Stirling and plunge into a picturesque landscape of undulating hills and long, empty roads. If there’s a better sensation than driving a convertible Aston Martin along a deserted country road with Duran Duran’s A View To A Kill blaring out of the stereo, I suspect it’s illegal,” Rob McFarland, Traveller Magazine Australia, November 2015. Pick up your Aston Martin and head off on a route which will take you past Faslane naval base, featured in The Spy who Loved Me, and the loch by Crinan, actually used for filming of a boat chase through the Bosphorus in From Russia with Love. Then what could be more appropriate than staying in luxury on a private island? While you’re here, learn how to make the ultimate martini, then be whisked by speed boat out to Duart Castle on Mull, traditional home of the MacLean’s. The castle fell into ruins but was restored early in the 20th century and is once again the seat of the clan chief. The exploits of soldier and diplomat Fitzroy Hew MacLean, who parachuted into Yugoslavia to assist the resistance in WW2, are said to have been the origins of Ian Fleming’s James Bond and 007. Your return journey saves the best for last, with a spectacular drive through Glencoe, setting for the dramatic finale of Skyfall. Your Hotel What could be more Bond than staying on your own private island? Cross the rickety bridge from the west coast mainland to this idyllic hideaway and you enter a different world – a world of luxury, seclusion and not a little eccentricity! This delightful island retreat offers intriguing contrasts and pleasant surprises at every turn. Choose to stay in a characterful room in the baronial mansion, or splash out – literally – on a Spa suite, complete with private conservatory, patio, large lounge, luxury bathroom and outdoor Jacuzzi hot tub. What’s more, September 2014 saw the hotel’s restaurant win its first Michelin Star for its commitment to creating a food identity to match it’s natural surroundings. Leisure facilities at the Stables Spa are a testament to streamlined modernity with a 17 metre indoor heated swimming pool, state-of-the-art gym, sauna, steam room, aromatherapy and reflexology suite – plus a rooftop terrace for leisurely lunches. There’s even a challenging nine hole golf course, with superb views from its greens and fairways. But what really makes this place special is the child-like pleasure of wandering along secret woodland pathways and discovering rocky coves where you’re unlikely to meet another soul save for a few playful otters.
Find out more about the Aston Martin Weekend
Find out more about the Aston Martin Weekend
x
Member login