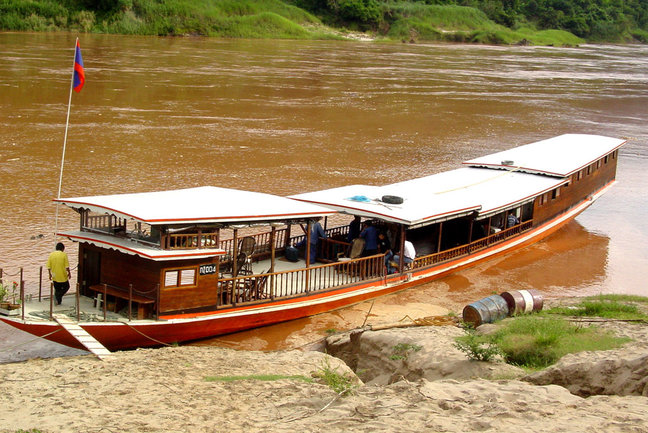 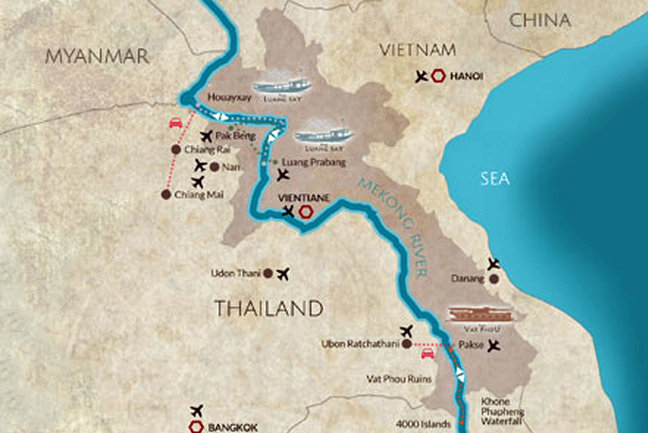 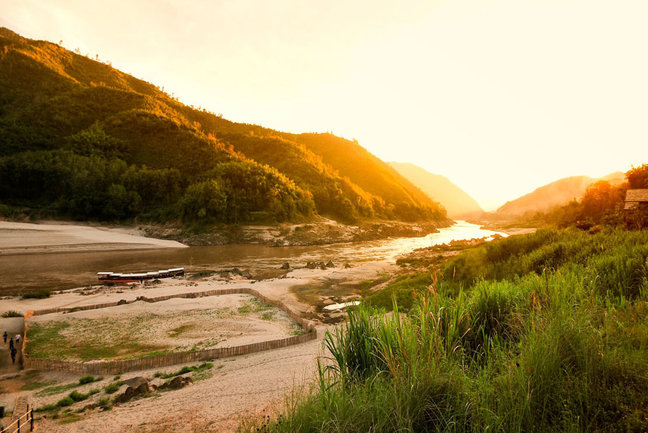 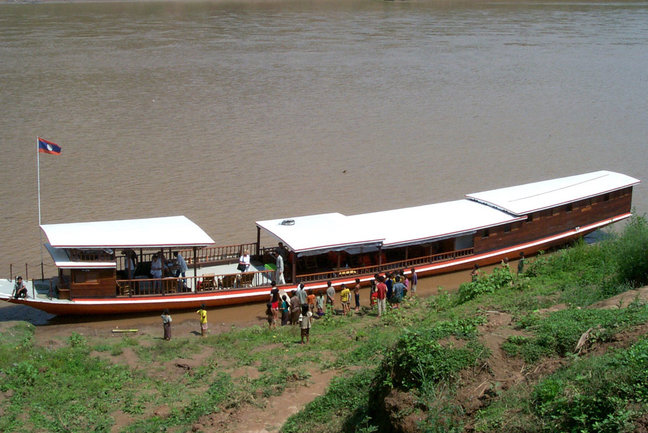 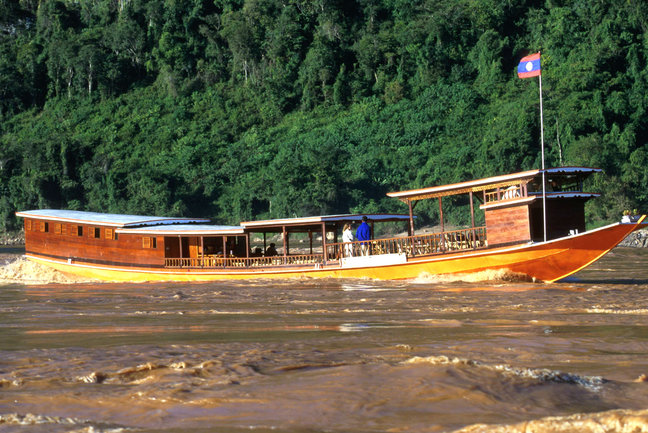 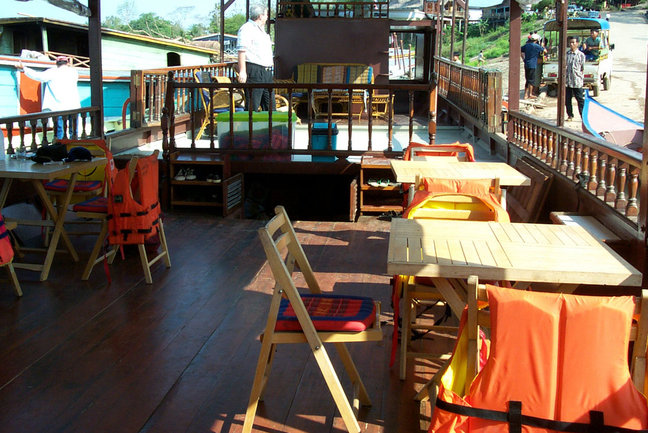 Find out more about the The Luang Say Cruise

Situated along the river this luxury lodge offers memorable views of the Mekong.

It’s a perfect way to relax and enjoy a unique and romantic cruise on the Mekong.

Best time to visit is during the dry season from November to Feb.

After completing Thai immigration formalities, our representative will help you get a shuttle bus to cross the bridge and go through Lao immigration. Afterwards transfer to the Luang Say cruise boat, which is parked at the slow boat pier in Huay Xai.

09:00 am Depart from Huay Xai pier and cruise down the Mekong to Pakbeng. After one hour journeying along the river, the boat stops at an ethnic village, Ban Gon Dturn. This is a chance to observe rural life along the Mekong and witness the daily life of ethnic minorities and their talented craftsmanship. The inhabitants are Tai Lue tribe people, who originally came from the Yunnan area of China around 300 years ago, fleeing persecution. They can now be found in the northern Lao provinces of Bokeo, Luang Nam Tha, Phongsaly, Luang Prabang and Sayabouly. The Tai Lue traditionally live in the valleys and low, flat lands. There are 180 households in this village, encompassing 850 people.

Houses in a Tai Lue village are traditionally on stilts, and the ground under the houses is used to store tools, firewood, and weaving. Upstairs consists of a large balcony used as a living room and guest bedroom. The inside of the house is not divided into smaller rooms, but remains as one large dormitory style sleeping quarters, with an area for cooking in one corner. The houses have small windows and a twin-peaked roof. They face the river as this is considered to be good luck.

Agriculture forms the main occupation of the men in the village, whether tending rice fields or planting other crops. Produce not required for village consumption is sold to merchants who pass by on the river. Tai Lue women specialise in weaving, much of the cotton and indigo dyes they use are cultivated in the village itself. Silk is imported from other provinces. They too sell their cloth to the passing boat traders. It is also the women responsibility to look after the family.

Men wear blue or black clothing, and a scarf on their head. Their bodies are often covered with tattoos. These important designs are for personal protection from spirits and natural afflictions and are considered very manly and attractive to Tai Lue women. The women wear a Lao style sinh, or long skirt, usually made by the women who wear them.

The river cruise arrives at Luang Say Lodge near Pakbeng before sunset, giving plenty of time to refresh, enjoy the scenery of the river and admire the surrounding nature. A Laotian dinner is served on the open air terrace overlooking the Mekong River.

On the left bank of the river, the Luang Say Lodge is backed by mountainous jungle. The l20 large pavilions of solid teak and rosewood all have beautiful vistas looking out over the Mekong River and the mountains beyond. The traditional Laotian architecture provides accommodation of comfort and character, each bedroom equipped with high ceiling mosquito nets, electric fans, and a large private bathroom with hot shower and a western-style toilet.

A central riverbank restaurant is reached by wooden walkways from the pavilions. Here you will enjoy fine, mainly organic, food and can order a choice of drinks from the well-stocked bar.

Mornings are special times at Luang Say Lodge with stunning sights of the peaceful neighbouring mountains, often shrouded in mist, while a full breakfast is served on the expansive teak terrace.

At 8 am the cruise departs for another day of nature discovery along the legendary river with two stops planned along the way to Luang Prabang.

Traditional Laos Village. A few hours into the day after enjoying the sights of granite cliffs and sparkling sandy shores, the river boat makes a stop to visit the hill tribe village of Baw, where you can watch the traditional process of making Lao whisky.

“Baw village” is located on the Mekong River between Luang Prabang and Pakbeng. Ban Baw is a very old village. For over 600 years the village has held three different ethnicities: Lao Loum (the ethnic majority in Laos), Tai Lue and Shan, but these days the majority are Lao Loum. The population of 450 live in 45 households.

Shan people came to Ban Baw as refugees from Burma. Those that remained have learnt to integrate with the Lao and their customs, believing currently in a mix of Buddhism and Animism (spirit worship). Nowadays, the three tribes live together in harmony as family and have developed similar customs to each other, wearing indistinguishable clothing and celebrating events such as weddings in the same fashion.

Lunch is served onboard in a buffet style with a selection of starters and main course from Laos’ cuisine.

Caves of Thousand Buddhas. Opposite the mouth of the Nam Ou River, near Pak Ou village, the cruise stops to visit the Pak Ou Caves. There are two caves; Tham Thing (the lower cave) and Tham Phoum (the upper cave).

These caves contain thousands of Buddha images and are of great religious importance to the Theravada Buddhists in Laos. These caves were converted into Buddhist temples in the 15th century and are used as a site for old Buddha images that can no longer be venerated in a temple, either because they are damaged or the temple they were displayed in has been destroyed.

Following a day along the wide Mekong River, with beautiful sceneries of mountains, wild nature, local life and delicious food, the cruise arrives at Luang Prabang, the former imperial capital of Laos.