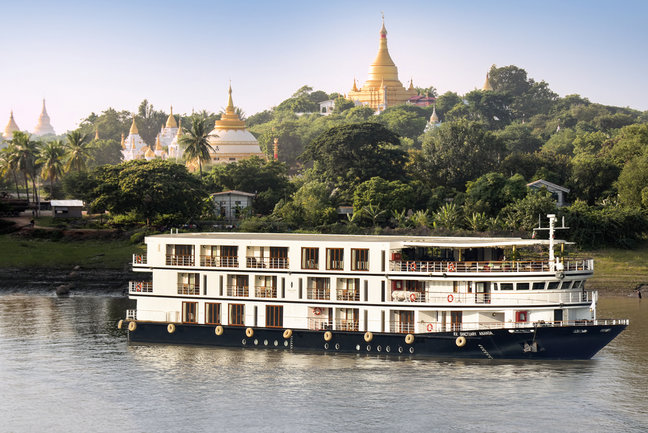 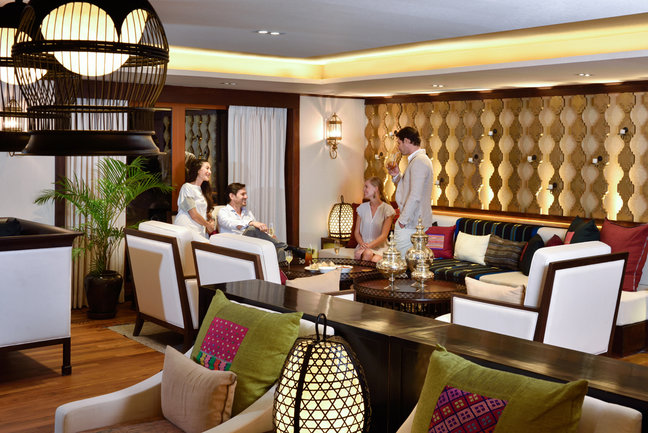 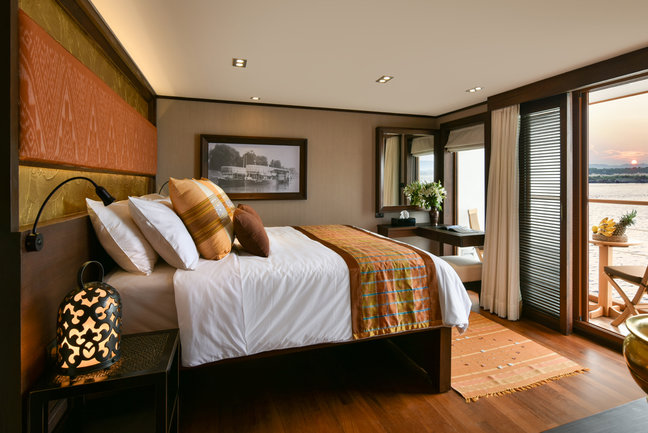 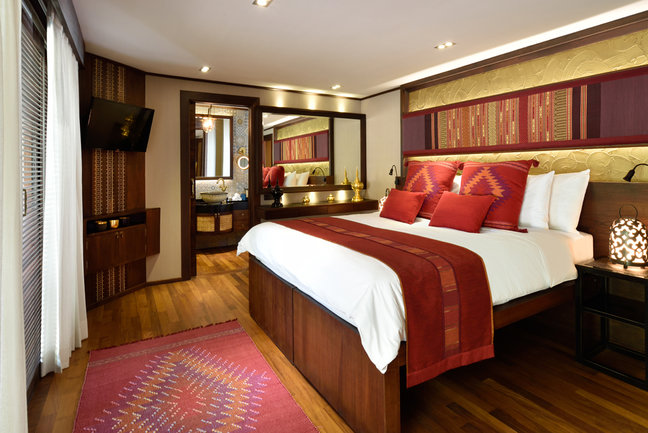 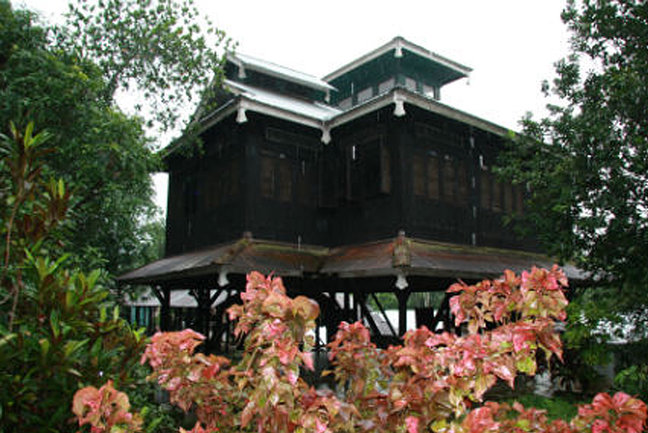 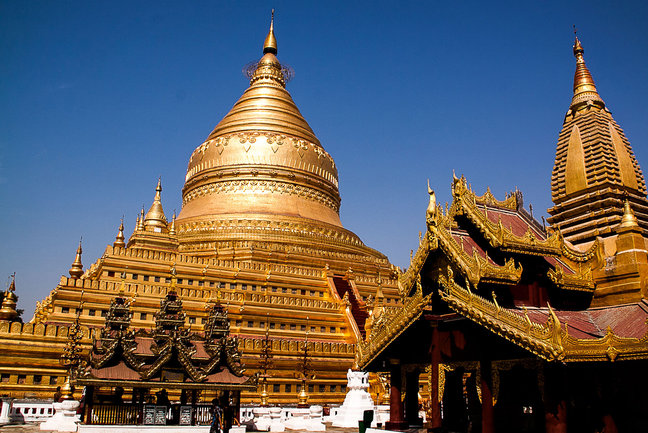 Find out more about the River Cruise: Sanctuary Ananda

A luxurious all-suite cruise on the great rivers of Myanmar: on the majestic Irrawaddy from Bagan to Mandalay visiting temples, pagodas, palaces and monasteries along the way, while journeys on its great tributary, the Chindwin, will take you to places visitors rarely see – through the jungles of the north, forgotten villages and ancient towns .

A luxurious all-suite cruise ship that will take you in style on voyages of breathtaking beauty and discovery on the great rivers of Myanmar: on the majestic Irrawaddy from Bagan to Mandalay visiting temples, pagodas, palaces and monasteries along the way, while journeys on its great tributary, the Chindwin, will take you to places visitors rarely see – through the jungles of the north, forgotten villages, ancient towns almost to the Indian border.

In this 11 nights cruise from Myanmar's biggest city Yangon to Mandalay via Pyay and Bagan, you will be provided with fantastic views of the passing scenery and the shore excursions will allow you to meet the local people in their villages.

Best time to cruise Myanmar/Burma is the dry winter season from November to February.

Check in by 11:15am and settle into your suite before we leave the bustle of downtown Yangon to join the Twante Canal which connects the Yangon River to the Irrawaddy River.

The scenery will be both urban and rural, rows of vegetables grow in tidy allotments by the side of the canal or maybe a man dangling a long bamboo fishing line into the canal. Twante town itself is famous for ceramics.

Tonight we will dock at Nyaung Tong, a riverside beach.

This morning we will visit the charming small town of Danuphyu, it was here that General Maha Bandula led the Burmese against the British in 1825 during the First Anglo-Burmese war. Explore the town by trishaw, visiting the Pagoda of Tyuakalon Pun and the Maha Bandula monastery.

Dinner and overnight on board.

Day 3: Sailing on the Irrawaddy River

Today will be spent sailing and provides a scenic introduction to Myanmar, a feast for the eye, the villages, noble tamarind trees, the dazzling green paddy fields, distant hills dotted with pagodas: the chief beauty, however, lies with her people, a people in harmony with their environment.

This afternoon, sail past the Akauk Taung Caves. Here you'll be able to capture the best possible photos of these truly staggering caves. Meaning 'Tax Mountain', this quirky site takes its name from all the 19th-century toll-takers who would kill time in between charging passing boats by carving hundreds of Buddhas right here into the steep cliffside.

Today will be spent exploring the town of Pyay (pronounced by some as 'pyay' and 'pyi' by others), a charismatic dock with a startlingly beautiful pagoda.

Visit the city centre and local market, followed by lunch on board. In the afternoon, visit the ancient city of Sri Ksera, once the capital of Pyay dating from around the first century. The ancient city gained World Heritage status in 2014.

This morning visit the small town of Shwe Taung. Here you will visit the Shwe Hmyet Hman Pagoda, where the Buddha image wears gold sunglasses. Lunch on board will be followed by an afternoon of sailing.

After lunch, a variety of onboard activities will be offered including a longyi (sarong) and thanaka (cosmetic) demonstration.

Tonight we will dock in Thayet.

Take in mystical white pagodas and charming colonial houses as we explore postcard-perfect rural Thayet on foot. Built by the British in 1887, Myanmar's first golf course is also here.

In the afternoon, sail from Thayet to Minhla.

Begin your day with a walking tour of the two brick Minhla Forts. An unusual construction, the fort was originally dated from the 13th century and enlarged and strengthened by Italian engineers, to resist a British invasion during the Third and final Anglo-Burmese war.

Return to the ship and sail to Magwe and on the way visit the hilltop Myat Than Lun Paya, a pagoda built in 1929 of solid gold bricks - this is an extraordinary building with stunning views of the Ayeyarwady.

Dinner and overnight on board

Sail in the early morning enjoying the scenery and life on the riverbank. You will sail past Pakan Lay village where temple ruins lie decorously along the banks and then arrive Sale. Sale is a perfect small community to wander around on foot or by trishaw. We will visit Yoke Sone Kyaung monastery, a fine teak building with some beautifully crafted reliefs.

Our final stop before returning to the boat for dinner is Tha-ta-na Kyaung - this small temple has an interesting Buddha image made from bamboo.

Dinner and overnight on board.

This morning will be spent sailing to Bagan.

After lunch, we will visit Myinkaba village, a centre of the ancient craft of lacquerware which has been produced in Bagan since the time of King Anawrahta around 1050 AD. Here in the workshop, the traditional methods are still used. The last stop is at a jaggery workshop which produces unrefined sugar. Next, visit the Ananda Temple. Completed in 1091 AD, it is commonly referred to as one of the four great temples in Bagan. The Ananda is regarded by folklore as one of the most beautiful temples in Myanmar. A traditional horse cart will then take us to Htilominlo Temple; a two-storey red-brick temple built around 1211 AD. It is a magnificent structure, though now heavily restored.

The day's finale is a quiet moment on the terraces of the Pyathatgyi Temple. Admire the light change on the pagodas as they exude antiquity and mystery. Finally, the sun sets behind the hills on the far side of the Irrawaddy River, filling the sky with a reddish glow, a truly magic moment.

The day ends with a spectacular and unique candlelit sandbank dinner.

After breakfast, we will visit the bustling Nyaung U local market. The daily market is where the farmers meet to buy and sell a variety of goods, ranging from fruit and vegetables to china and lacquerware. Next, on to the great golden Shwezigon Pagoda which is said to contain important relics of the Gautama Buddha, two bones and a copy of a tooth.

We will then return to the ship and start sailing upstream towards Sagaing. Relax as we pass villages set against a backdrop of soft browns, rich tamarind trees with white and golden pagodas gracing the distant hills. There is no better way to enjoy this riverine picture than from the Kansi panorama lounge.

After lunch, a variety of onboard activities will be offered including a longyi (sarong) and thanaka (cosmetic) demonstration, a cooking class with the chef, cheroot and betel nut tasting and a talk on Myanmar - covering the country's incredibly rich history, more recent & controversial events and prospects for the future.

The morning will be spent sailing and enjoying the passing countryside. In the afternoon we will arrive beside the pagoda sprinkled Sagaing hills, an important religious and monastic centre, home to some 554 monasteries and 6,000 monks and nuns.

We will take a short stop at several of the monasteries and pagodas but it is the views from the top of the hill on the terraces of the Soon U Ponya Shin Pagoda which are truly breathtaking. Below and all around, pagodas of different shapes and sizes dot the landscape.

Enjoy a local performance, followed by dinner on board.

For those who wish, an early morning visit to the village of Sin Kyun is offered, a village just north of Mandalay sponsored by Sanctuary Retreats Philanthropy. It has a population of just under 1,000 inhabitants and specialises in farming and hat making. Witness first-hand the way of life in this unspoilt location seldom viewed by outsiders. Following the village Chief's request for a library and a house for an English teacher, Sanctuary Retreats Philanthropy donated the money necessary to begin this new partnership. We hope that with the support of Sanctuary Ananda guests, we will be able to provide further funds to improve the quality of life of the villagers.

At 8:30 am the Sanctuary Ananda will sail for Mandalay and will arrive at 9:45 am.

Continue your Myanmar holiday with an extension to spectacular Inle Lake.