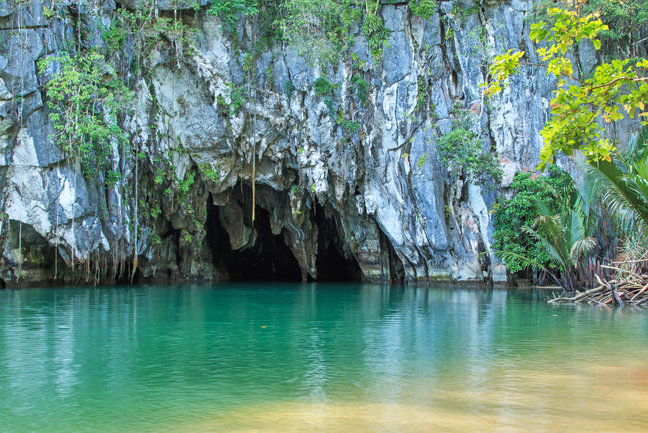 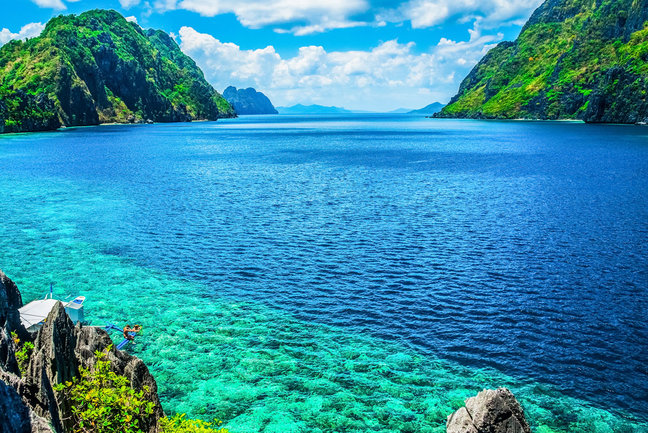 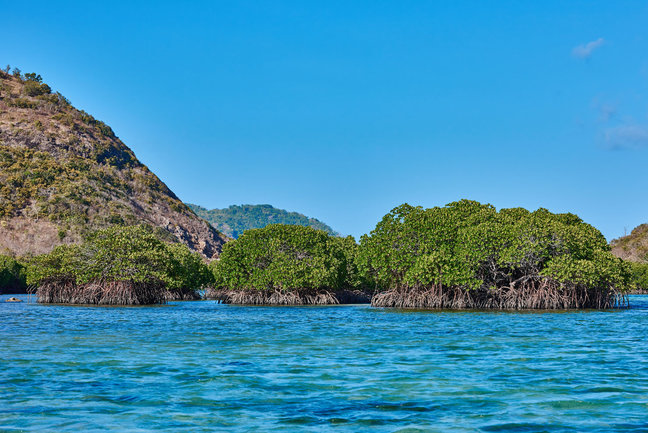 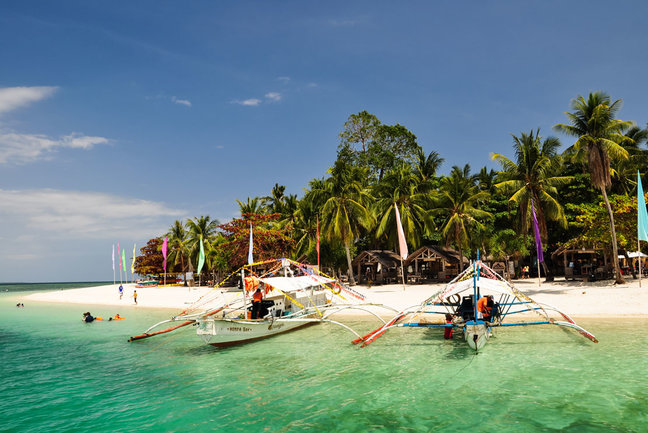 Find out more about the Palawan holidays

Palawan Holidays The island province of Palawan is the largest province in the Philippines, made up of 1,700 islands and islets. Much of the area is hilly and mountainous with wide spreads of jungle and rainforests with natural caves.

The coastline and offshore islands have an abundance of deserted beaches and hidden coves, clear coastal waters teeming with aquatic life and coral formations.

Palawan may be divided into three areas, North and South and the Calamian group of islands in the north (between Palawan and Luzon).

The southern area has the following points of interest. Tabon Caves, Lipuun Point, Brooke's Point - dominated by a black stone spear-like mountain is the jump off point for Rio Tuba, from where bancas may be hired to visit Ursula Island, a bird sanctuary.

In the northern area, the 10 km long Honda Bay is dotted with several islands, Cowrie, Bat, Snake, Canon and Meara. Almost at the tip of the mainland is El Nido with its numerous islands of high cliffs and secret coves.

The Calamian group of islands is made up of Busuanga, Coron, Culion and the Linapacan group. Coron has its salt water lakes and there is the game preserve and sanctuary on Calauit Island, north of Busuanga.

Upon arrival in Puerto Princesa, transfer to the small coastal village of Sabang, located at the foot of the St Paul's Mountain range and the gateway to the Underground River, a UNESCO World Heritage Site. In the afternoon, you will visit an old-growth mangrove forest where hundred-year-old trees support a variety of wildlife including mangrove snakes, monitor lizards and birds.

Depart for Saint Paul Subterranean Park where an outrigger boat takes you to the UNESCO World Heritage Site’s Underground River, a bat-filled cavern of fluted columns and piped-walls. After the tour, hike for one and a half hours back to Sabang via the Monkey's Trail through limestone forests.

Transfer to the pier to enjoy a whole day island-hopping excursion at Honda Bay. There’s Bat Island, home to thousands of bats that live on trees and fly out at night in search of food; Snake Island is so named because of its shape; other islands are Pandan, Starfish, and Luli. There are ample opportunities for snorkelling, swimming and sunbathing.

Travel by vehicle through the scenic countryside of North Palawan. At Taytay, board a boat for Apulit Island.

Taytay to Apulit Island: 45 to 75 mins boat journey depending on weather

Apulit Island is close to Nabat Island which is surrounded by reefs and offers some of the best diving in Palawan.

Take the boat back to Taytay and continue by road to El Nido. Another boat will transfer you to Miniloc Island.

You will be transferred to El Nido Airport for your departure flight to Manila or Cebu to continue with your Philippine adventure.

Miniloc Island to the El Nido jetty: 45 mins boat journey depending on weather