The Villas & Gardens of Florence 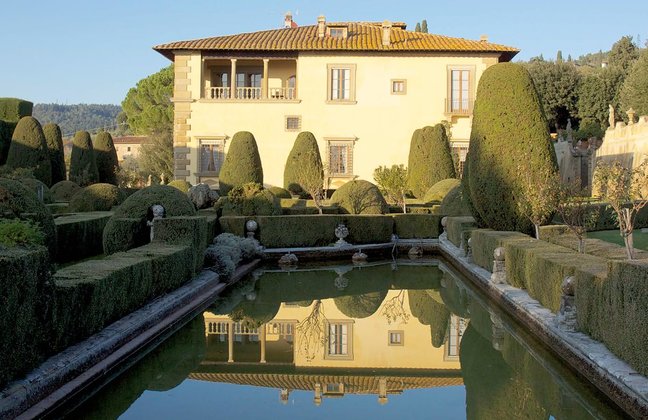 The Villas & Gardens of Florence Overview

Otium: The Villas & Gardens of Florence

The rise of Cosimo de’ Medici and his family during the fifteenth century saw Florence physically transformed through the example of his family’s patronage: secular palaces, new churches and remarkable works of art bear ample testimony to their dominant role. By the end of that century the Medici had turned to a new fashion sweeping Italy, the villa suburbana. These were villas built either just outside the walls of cities or an easy day’s ride away, where owners could enjoy the benefits of relaxation, yet remain in direct touch with political and economic events in town. This is what Cicero, Pliny the Elder and others described as otium, the much needed opposite of negotium – the busy life of the city.

After centuries of chaos following on from the collapse of the Roman Empire, medieval Italy witnessed an increase in both economic activity and personal security. Many felt able to remodel their fortified farmhouses, converting them into comfortable dwellings informed by a revival of interest in classical architecture. This is reflected in the patronage of families like the Medici, the work of architects such as Michelozzo and Giuliano da Sangallo and theoretical writers such as Leon Battista Alberti. These exciting innovators embraced the correct use of the orders, a new sense of spatial harmony, the manner in which the ancients decorated and used their villas and above all, the integration of these dwellings within their surrounding landscapes.

Enclosed herb gardens and pastoral surroundings were transformed. Formal geometry was applied to nature and given intellectual context by the addition of classical statuary and the revival of ancient features such as the grotto. Further refinements were added in subsequent centuries and while many historic gardens eventually fell into neglect, rescue was at hand via the intelligent and wealthy Anglo-American community who settled in the hills around Florence from the late nineteenth century onwards.

This is the world of Edith Wharton, Bernard Berenson, Harold Acton and their friends, many of whom employed the peerless Cecil Pinsent (1884 – 1963). A genius, Pinsent not only restored gardens but also created new gardens in a manner that would have astonished and satisfied the Medici had they had him as an advisor.

From our wonderful location at magical Fiesole, directly overlooking Florence, our visit will trace the development of the Florentine villa and garden both outside and within of the city: Poggio a Caiano, Artimino, Castello and La Petraia from the Medici era; the modern “greats” such as Le Balze, Fonte Lucente, La Pietra, Villa Capponi and above all Villa Gamberaia will all be visited, and in some of which we shall be entertained to lunch.

We shall stay in the 4*Hotel Villa Fiesole ideally located half-a-mile from Fiesole on a hill overlooking Florence, complete with a panoramic terrace and restaurant.