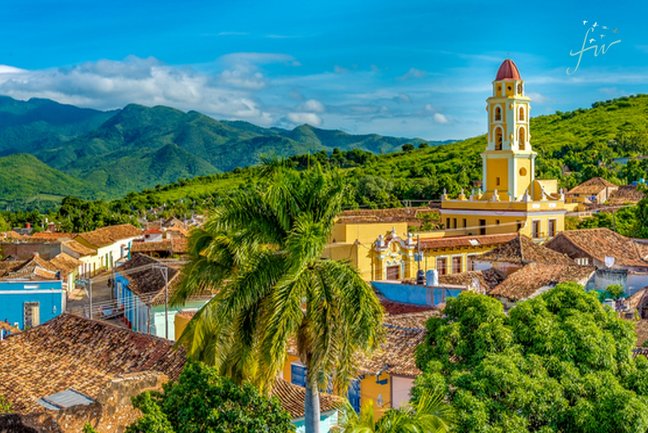 The best of the best is in store for you on this private tour of Western and Central Cuba. From the enchanting city of Havana, through the natural wonders of Vinales, the French colonial city of Cienfuegos and the truly magical Trinidad to endless, white Caribbean beaches.

DAY 1 - ARRIVAL IN HAVANA Welcome to Cuba. Meet & greet at the airport with your English-speaking guide or our airport representative and transfer to your casa particular.

DAY 2 - FASCINATING HAVANA CITY TOUR In the morning pick up at your hotel by your private, English speaking Cuban guide. The day starts with a walking tour through colonial Old Havana with its most important sites: Calle Obispo, Plaza de Armas with Palacio de los Generales, El Templete and Castillo de la Real Fuerza. Cathedral Square with the nearby Hemingway’s “Bodeguita” and the “Old Square” Plaza Vieja. Lunch in one of the popular private restaurants like “Dona Eutimia” or “La Moneda Cubana” near the Cathedral Square. In the afternoon, a classic American car with driver is waiting for you for a tour through the Havana of the 1950’s along the Malecon, to Revolution Square and via Avenida de los Presidentes to the residential and diplomatic quarter of Miramar with its beautiful mansions along the Quinta Avenida. After a cocktail at the garden of the legendary Hotel Nacional with stories of the Mafia in the 50’s, it’s back to Old Havana.

DAY 3 - HAVANA - VINALES The day starts with the visit of one of the famous tobacco factories e.g. H.Upmann, Partagas or Romeo y Julieta. See the skilful hands of the torcedores (cigar rollers) producing the best cigars in the world. Further on to Marianao where, in an old theatre, you will see a rehearsal of Havana Queens, the leading contemporary dance ensemble in town. You will sit on the stage close to the dancers while the manager or choreographer tells you the exciting history of the young dancers. Afterwards, along the “tobacco route” to the western part of the island, where the best tobacco-growing soil can be found. Enjoy breathtaking views from the mirador “Los Jazmines”. The Viñales valley is a UNESCO world heritage site, with its impressive landscape panorama and diverse vegetation. Panoramic tour through the valley. Evening at leisure.

DAY 4 - VINALES During your hiking tour, you will cross the valley, which with its red, fertile land and impressive rock formations, called mogotes, is a perfect photo spot. The camera stays ready at hand on this tour. Stop at a local veguero (tobacco farmer) who will introduce you to the secrets of tobacco cultivation. While walking through a tobacco drying house you will be shown how to produce a real Cuban cigar the traditional way. Lunch creole style e.g. at the paladar “Alberto Vitamina” or at the “Finca Agroecologica”. Later enjoy an “anti-stress” cocktail at Finca Agro-Ecologica”.

DAY 5 - VINALES - BAY OF PIGS - CIENFUEGOS Early in the morning start for a longer trip to Central Cuba along the „autopista”, the Cuban central highway, sometimes nearly empty without traffic and where you still can encounter strange “vehicles” such as horse drawn carriages, bicycles or sleeping cows. Stop for a refreshing swim at the snorkeling bay “Caleta Buena” in the historic Bay of Pigs. A Cuban style lunch buffet is included. Continue to the port city of Cienfuegos characterized by its French colonial architecture and also known as the “Pearl of the South”. Distance: around 6 hours

DAY 6 - CIENFUEGOS - TRINIDAD In the morning, a city tour in Cienfuegos. Walk around the main square Parque Marti with the nostalgic Terry Theatre, where once Caruso sang. Continue to the Peninsula Punta Gorda with its mudejar-style Palacio del Valle and the white Yacht-Club. Time for lunch. Afterwards follow the panoramic coast road to Trinidad – a UNESCO world heritage site with unique colonial architecture. Enjoy a walking tour through cobblestone lanes and over the idyllic squares of Trinidad, surrounded by the beautiful colonial mansions of former sugar barons. Visit one of several museums, e.g. the City Museum at Palacio Cantero. Don’t miss the local honey liquor, which you can try at the rustic local bar „Canchancharra“. Distance: around 1.5 hours

DAY 7 - TRINIDAD: TOPES DE COLLANTES NATIONAL PARK Today up into the mountain of Topes de Collantes, known for its healthy micro-climate. Stop at the “Casa del Café y Cacao” and enjoy a freshly brewed coffee after the explanation to coffee cultivation. Later enjoy a beautiful walk on the “Guayanara Trail” through the wild Sierra Escambray. The path takes you along the “melodioso” river and through stunning nature. On the way you can take a cold shower under a waterfall and go for a refreshing swim in a natural lagoon. Afterwards lunch at the “Finca Gallega”. In the late afternoon it’s back to Trinidad. Afternoon at leisure.

DAY 8 - TRINIDAD – SANTA CLARA – CAYO SANTA MARIA In the morning drive to the Sugarmill Valley. Stop at Hacienda San Isidro with a short explanation to the history of slavery and sugar cane cultivation of the 19th century. Continue to Manaca Iznaga with the hacienda of the former sugar barons Iznaga and the legendary “Slave Tower” from where you can enjoy breath-taking panoramic views over the valley. Afterwards. you continue your journey to the historic city of Santa Clara, where Che Guevara celebrated his greatest victory and found his final resting place. Visit the Che Guevara Monument and the small Café Revolucion with its unique collection related to Fidel and Che. In the late afternoon further on to the nature-, beach- and island paradise of Cayo Santa Maria.

DAY 11 - CAYO SANTA MARIA - HAVANA Check out at 12:00 and transfer back to Havana. In the evening enjoy an E-Bike tour with the original Cubykes by night. You pass the most important districts of Havana in the darkness and get completely new impressions of life in Havana by night. You will visit the most popular spots and districts of Havana and get to know the most interesting historical and cultural highlights. Transfer to the starting point of the tour in Vedado from your hotel in the old city centre by Coco Taxi.