Unknown places in Brazil: the Chapadas 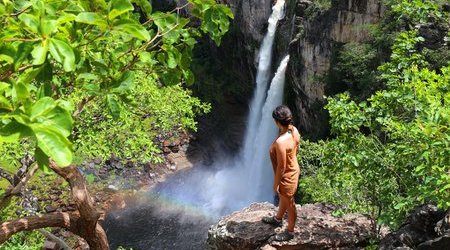 08 May 2018 Brazil has been appearing on the screens and making headlines during the 2016 Olympics and if you were not there it at least made you wanna be there too. Just before that the burst of zika has taken away the desire of travelling to Brazil on the other hand, at least definitely from those planning a family. Zika is still for some reason associated with Brazil, but the good news is that they have reacted seriously about it in the whole country and have taken measures against the disease. The recent news has been very positive and as of November 2016 the Brazilian Ministry of Healthy has lifted the emergency.

When thinking about Brazil, Rio de Janeiro will pop up first in the mind of a conventional traveler. Cidade Maravilhosa - the marvellous city - they call it! The city has been blessed with nature, beaches and a mixture of cultures, it is indeed absolutely spectacular, even the king of Portugal was once bewildered by its beauty and moved his crown there. On the other hand it’s somehow unfair that Rio gets all the attention and the rest of the country is left out. Just a quick look on the map would suggest that Brazil is bigger than Europe altogether and almost the size of USA. If Rio is so amazing, imagine how much more beautiful would be the rest of Brazil, which is made of national parks and pure nature?

Traditionally most Brazilians tend to move to the Southeast in the states of Rio de Janeiro and São Paulo, which are the wealthiest in the country. Influenced by this factor, big city traveling in Brazil comes with its advantages, the main one being connectivity and that all-mesmerizing buzz, but it also brings in the disadvantages like high prices, crime, congestion and a salesy hospitality. Now the curious traveller is always in the search of the authentic, the local, the genuine. Why not step into the soil of the rest of Brazil, I know your itchy feet can’t wait. I will also add that passed its mega-cities, Brazil comes cheaper, way cheaper.

As the world is getting more connected, there are many other entry points in Brazil, apart from Rio and São Paulo, with direct flights from Europe and USA. Another favourable condition is that flying internally in Brazil sometimes comes more affordable than taking a bus. Literally every city such as Brasília, Recife, Natal, Fortaleza, Belo Horizonte, Salvador, Porto Alegre and Manaus are within a driving distance from a national park, unique cultures and landscapes.

The unknown chapadas of Brazil

Chapada dos Veadeiros is a true hidden gem. It is far from the coast. It attracts a conscious traveller. It has been a place to learn about the disappearing and endangered cultures of Brazil. Since year 2000 the amazing event of Encontro de Cultras takes places here in July-August. There are several quilombolas in Chapada dos Veadeiros, these are settlements of the running slaves who survived on their own far away in the jungle. In the quilombolas communities they preserved cultures which have been wiped out or disappeared completely due to persecution along the centuries. Some of them survived and still pursue a simple life in harmony with the nature.

Apart from its cultural importance, Chapada dos Veadeiros is literally a paradise. The nature at its purest form is everywhere: waterfalls, lakes, caves, rivers, exotic birds and the plains of cerrado – it is hard to describe its beauty in words. One does not need to stay in a line to enjoy the nature, take a deep in the waterfall or order the dinner. This chapada is also a proof that there are safe places in Brazil. You will feel as a member of the family, you will be given a ride without asking for it and you will probably start learning your first words in Portuguese here – friendliness is in the air.

Chapada dos Veadeiros is also a paradise for geologists, as the platform sitting at its base is made of crystals so bright, that the chapada is even visible from space. No joke!

Brasília, the capital city, is about 3h driving away and is the closest gateway to Chapada dos Veadeiros. Alto Paraíso de Goiás and São Jorge are the best places to be based in. Boutique and rustic are the right words to describe these places. Alto Paraiso is bigger and has a better infrastructure, whereas São Jorge is a charming small village, quite artsy and peaceful. Most of the waterfalls are located within a private property with small entry charges, but the good news is that these sights are really preserved and taken care of. Vale da Lua and Cachoeira Santa Barbara are a must-see. The national park, located just a few minutes’ walk from São Jorge does not have an entry fee. The trails are very easy to walk, but one needs a day for every trail.  The park is full of lilies and orchids, only imagine! I would really recommend this place to people who like to connect with nature, who love art and culture and are looking to explore the beautiful but non-touristy Brazil.

For the avid hiker and waterfall chaser Chapada Diamantina will keep one busy for weeks. There is so much to see here, that one visit will never be enough. Getting around takes time, but it is worth it, because the most beautiful places are far of reach, such as Poço Azul, Cachoeira do Mosquito, Cachoeira da Fumacinha, Cachoeira do Buracão, Vale do Pati and Igatu. These are just a few names. It is easy to get lost in Chapada Diamantina and guides would be recommended, especially if you would like to do a bigger circuit. Sometimes you will need equipment to get down the rocks and indications about direction as the signs are either not clearly marked or absent at all.

By all means do not think of Chapada Diamantina as of a place for the extra fit mountaineers, who carry mammoth backpacks and wear heavy boots, there are enough sights which are also reachable by car from Lençois, like Morro do Pai Inácio, Poço Encantado, Pratinha as well as many caves.

In Brazil very rarely you can fly in and go straight away to your destination of interest. Distances are huge and a bigger city will always be considered to break the journey. In this case we are lucky, because the best city to combine a trip to Chapada Diamantina is Salvador – a warmhearted amalgam of colour, rhythm and grandma-style cooking. Salvador has also been the gateway to some amazing palm-tree beaches and is definitely more known than its neighbouring chapada. Our trips to the Bahian state are designed to fit the highlights of the region, without trying to push it over the line and rush around in order to see everything. It is also not a very pleasant think to pack and unpack every day, therefore a more central location is chosen so that one can have more free time for the place itself. On a most important notice, everything we do can be tailor-made, you just have to tell us what you like and what you do not like and we will give you the direction to make the best of it.

Chapada means a highland plateau with table mountains. I think ‘just mountains’ is not the right word. A chapada is not too high to be a mountain, but also not too low to be just a hill. Once you’ve seen a few of them, you will know it is a chapada or not. Whichever one you choose, there will always be waterfalls! And it is hard to say which one is the best – they are so different and so unique, so ‘the best’ in every sense.

Apart from the ones I have mentioned above there are several other big ones, like Chapada dos Guimarães in the state of Mato Grosso and Chapada das Mesas in the state of Maranhão. Unfortunately given the size and geographical location I have not been able to visit them yet. With certainty they are also off the beaten track and have their beauty. Yes, expect waterfalls!

Elena Skalovskaia is the Brazil Travel Specialist at Fleewinter. Together they have launched Brazil as a new travel destination in May 2017 and have the intention to show the value of previously overlooked places in Brazil. She has travelled extensively in Brazil and is able to provide genuine advice and recommendations, plan and shape a personalized trip.
Share
Categories: Special Interest Travel Destination Travel Travel Advice Travel Tales
BACK
Blog categories