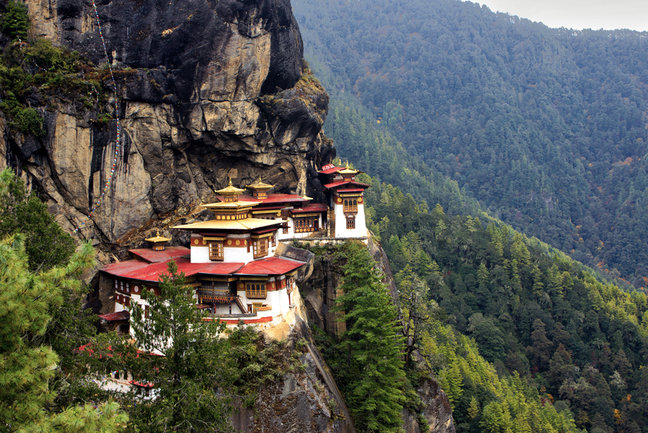 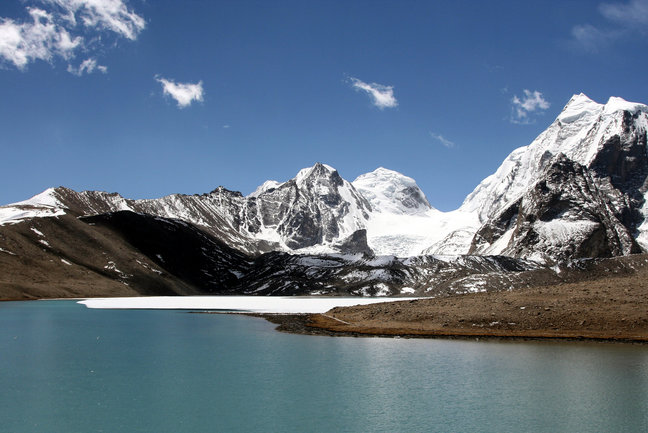 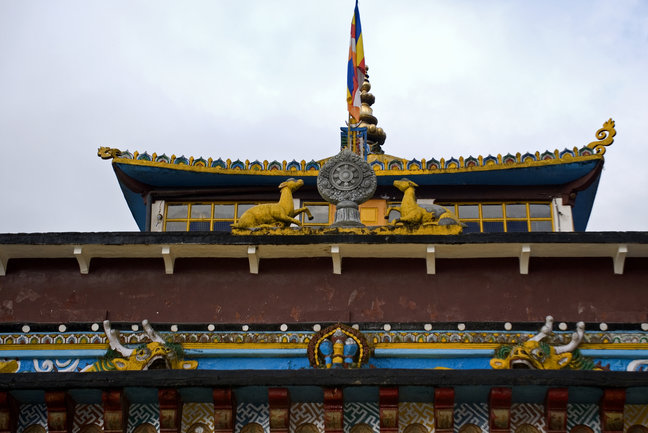 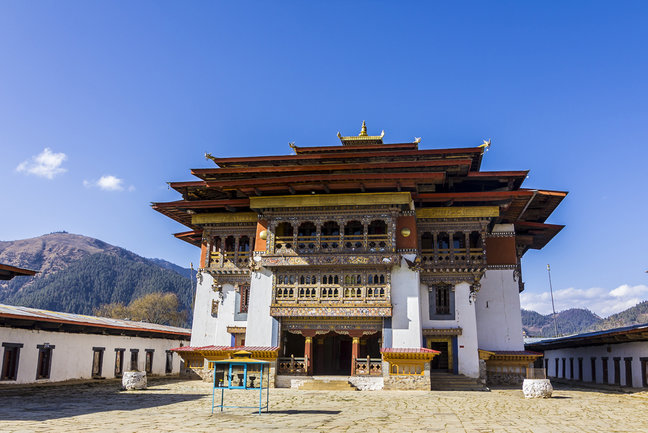 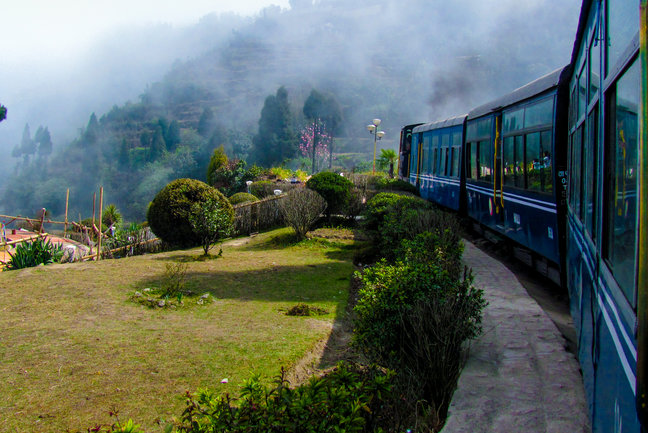 Find out more about the Darjeeling, Sikkim and Bhutan

From the lush green valleys of Darjeeling’s tea gardens, travel overland to marvel at Sikkim’s superb landscapes and a spectacular view of the Himalayas. Visit the exquisite nurseries in Kalimpong before crossing into Bhutan’s southern border at Phuntsholing. Head north to Thimphu, the capital of Bhutan.

From the lush green valleys of Darjeeling’s tea gardens, travel overland to marvel at Sikkim’s superb landscapes and a spectacular view of the Himalayas. Visit the exquisite nurseries featuring up to 600 species of orchids in Kalimpong before crossing into Bhutan’s southern border at Phuntsholing. Head north to Thimphu, the capital of Bhutan, to begin an in-depth immersion into the culture and traditions of this remote Himalayan kingdom. Bhutan is truly a magical country and to anyone looking for an inspiration for a holiday, I would say “do it".

Standing high in the Himalayas at an altitude of 2134m, ‘Dorje Ling’, or place of the Thunderbolt, offers breath-taking views of snow-capped mountain peaks, with the Kanchendzonga rising higher than all the others. Often referred to as the “Queen of the Hills”, it remains just as alluring with its tiny waterfalls, little villages and a narrow gauge railway track. Surrounded by world famous tea gardens and snow-capped mountains, Darjeeling remains one of the most exotic destinations.

Overnight at your chosen hotel.

Day 2: A day in Darjeeling

Return to your hotel for breakfast before enjoying a Toy Train Ride from Darjeeling to Ghoom and back on the World Heritage Toy Train.

The spectacular landscape unfolds as the 2-foot gauge Darjeeling Himalayan Railway, opened in 1881, labours at about 10 mph crisscrossing the road. It has tiny 4-wheel locomotives, some over 100 years old. You can experience the sound, smell, and romance of a bygone era.

Afternoon visit to a Tea Estate, Himalayan the Mountaineering Institute and Refugee Centre.

Day 3: Darjeeling across to Sikkim, Pelling

Pelling is a serene mountain village which lies in the western districts of Sikkim. This village is situated at an altitude of 2000 metres and commands a spectacular view of Mt. Kanchenjunga.

Visit Pemayangste Monastery and Rabtense Ruins and take an excursion to Khechipalri Lake and Rimbi Falls.

Drive to Gangtok and proceed for full day sightseeing in Gangtok.

Visit Rumtek Monastery and The Enchey Monastery: Perched on a ridge above Gangtok, the Enchey Monastery is nestled within lush woods with a spectacular view of Gangtok town. Afternoon visit the Namgyal Institute of Tibetology to see the two exquisite stupas, the Do Drul Chorten, built to commemorate the victory of good over evil and the Jhang Chub Chorten, built in the memory of Thrukshik Rinpoche, an ardent devotee, a great spiritualist and interpreter of Buddhism.

Drive to Kalimpong. At an altitude of 1250m, Kalimpong’s location is ideal for a pleasant, relaxed getaway. Kalimpong is famous for its nurseries which export exotic flowers like Amaryllis Lilies, Anthuriums, Roses Gerberas, Dahlias, Gladiola's as well as Orchids and Cacti.

Visit the Zang Dog Palri Fo-Brang Monastery, a fairly new monastery located in Durpin Dara for a panoramic view of the town and surroundings. The prayer room inside the monastery is adorned with wall paintings.

Day 7: Cross over to Bhutan arriving into Phuntsoling

Phuntsoling, the “gateway to Bhutan” in the south-west of Bhutan, is the only land border which grants access to the country. 90% of trade in Bhutan is with India and is conducted through this town. Phuntsoling being the border town has an Indian character and taste, even though it tries to maintain Bhutanese way of living. Arrive in Phuntsoling (Altitude: 2280m/ 7524ft above sea level).

Thimphu is a bustling town on the banks of the Thimphu Chhu and set gloriously in the hills of the Thimphu valley. It is home to the Bhutanese Royal Family, the Royal Government, and several foreign missions. Thimphu is the only capital city in the world that has no MacDonald, Starbucks, billboards and traffic lights.

After an early breakfast, take a drive to the base of the Tango Monastery where your hike will begin.

Located at the farthest region north of Thimphu, It is roughly 14 kilometres away from Thimphu town. Following the trail, the walk uphill takes about 40 minutes to reach the monastery. The word Tango literally means ‘horse head’ and is derived from the deity Tandin (Hayagriva) that features the head of a horse. The revered place of Hayagriva was first recognised by Guru Rinpoche in the eighth century. It is now the Buddhist College in Bhutan.

Return to Thimphu for an afternoon sightseeing tour.

Visit the Traditional Hand Made Paper Factory. The handmade paper-making craft in Bhutan stemmed from the age-old tradition originated in the 8th century of Bhutanese history. It began as a domestic ancient activity which is still in practice in remote areas.

Chortens are memorial structures designed to evoke the same perfect symmetry and elegance of the Buddha himself, and it is traditionally good luck to pass them on the left. This particular Chorten was constructed in 1974 as a memorial for the third King of the country, King Jigme Dorji Wangchuck, who is widely regarded as the father of modern Bhutan. People from all walks of life come and worship for the sentient beings.

A place from where you can get a good overview of the Thimphu valley is from the Buddha point (Kuensel Phodrang). It is again a short drive from the town. You can pay your obeisance and offer prayers to the Buddha, the largest statue in the country and then walk around and take a glimpse of the valley.

The name means Fortress of Glorious Religion. It was built in 1641 and was reconstructed into its present structure in the year 1962-1969. It houses the secretariat building, the throne room and the office of the king, and the central monk body. You can be part of the ceremonial national flag recess parade, performed every evening at 5 pm by the Royal Bhutan Police guards in its traditional finest grandeur. Sometimes if luck favours you could see the King coming out of his office on his way to his palace.

After breakfast drive to Punakha, over the Dochu La pass offering stunning views of all the Eastern Himalayas. This Pass at 3,048m/10,000ft is marked by 108 Chortens. The pass is a popular location as it offers a stunning 360-degree panoramic view of Himalayan mountain range. The view is especially scenic on clear, winter days with snowcapped mountains forming a majestic backdrop to the tranquillity of the 108 Chortens gracing the mountain pass.

Walk through the rice paddies to visit the Chimi Lhakhang, a delightful small temple built by Drukpa Kunley. Known as The Divine Madman', Drukpa Kunley was a 15th-century Bhutanese lama and is Bhutan's most popular saint and one of the most important figures in Bhutanese folklore. His style of teaching was thought shocking, insulting and including obscene behaviour. His outrageous actions and sexual antics were a deliberate method of provoking people to discard preconceptions. In the temple, you will receive a blessing from his wooden phallus. Wooden phalluses are often found hanging in the four corners of the houses and also phalluses are painted on the walls of houses. It is the common belief that this helps in driving away evil spirits.

Visit the fabulous Punakha Dzong, one of the most spectacular and important Fortress in the kingdom. Built in 1637 this majestic fortress is built in-between two rivers. Until the time of the second King, it served as a seat of the king. Now it is the winter capital of the central monk body. Every year in the month of February or March the Punakha Festival is held in this fortress.

Longest Suspension Bridge - Located close to the fortress, the longest suspension bridge in Bhutan connects a village to the paved road. The walk through the bridge will provide a scenic view of the river and the valley.

The valley of Gangtey/Phobjikha is well known as the winter home of the black-necked cranes. Bhutan is home to around six hundred black-necked cranes with Phobjikha being one of the popular places that the birds migrate to in the winter months from the Tibetan plateau. These elegant and shy birds can be observed from early November to the end of March. Overlooking the Phobjikha valley is the Gangtey Goenpa, an old monastery that dates back to the 17th century.

Day 12: Drive from Gangtey to Paro

Depart for Paro. This beautiful valley is home to many Bhutan’s oldest monasteries and temples. The valley is also home to Mount Jumolhari (7,300m/24090ft) situated at the northern end of the valley whose glacier water forms the Pachu flowing through the valley.

Sightseeing in Paro. Visit the National Museum to see some of Bhutan’s cultural treasures, Rimpung Dzong, Kichu Lhakhang, Drukgyal Dzong and in the evening take a stroll in Paro town.

This is Bhutan’s most recognisable cultural icon perched 800m/2640ft up a seemingly sheer cliff. Although it was tragically and mysteriously consumed by fire in April 1998 it has now been restored to its former glory. It is believed that in the 8th century, the great tantric master Guru Rinpoche/ Padmasambhava (2nd Buddha) flew on the back of a tigress to the site where the monastery now stands. The hike takes approximately one hour to reach the cafeteria and another hour to reach the heart of the monastery. Most of the route is through wonderfully cool and sheltered oak forests. There is a tea house half way for a break. After the tea-house, the path is slightly steeper and open with one area of exposed steps. It is a route that anybody of reasonable fitness can make but those who suffer from vertigo might prefer to wait at the tea house.

Start early to avoid the hot sun and remember to bring a hat.

Farm House: Picturesque farm houses dot the valley amongst fields and hillsides. We welcome you to enjoy the hospitality of the Paro farmers. Thrill yourself as the farmers welcome you to their homes with genuine smiles. The two to three-storied Bhutanese farm houses are handsome in appearance, with colourfully decorated outer walls and lintels, and are traditionally built. A visit to a farm house gives an interesting glimpse into the lifestyle of a farming family. You can cook, eat and take a hot-stone bath in the farm house.

Drive to Paro Airport for departure with Drukair flight. Possible extension to Thailand for your beach holiday or continue your adventure in Assam.