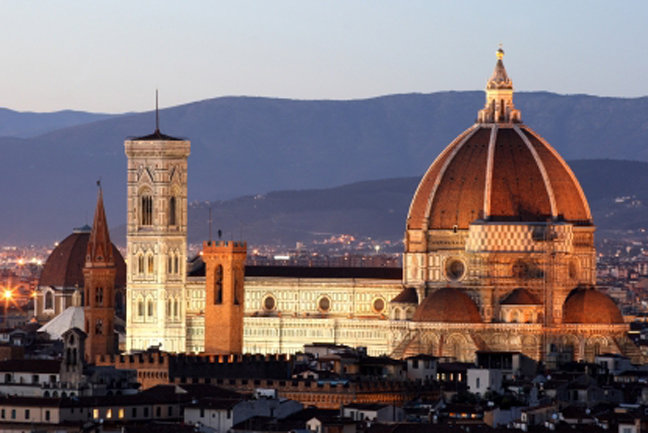 Discover one of Italy’s most extraordinary dynasties of art patrons; Witness the transformation of Florence into the cradle of the Renaissance; See masterpieces by Donatello, Ghiberti, Masaccio, Fra Angelico, Botticelli, Ghirlandaio & many others; Visit based in 4* hotel, ideally set on the banks of the River Arno.

Tour Lecturer; Paula Nuttall, one of the acknowledged experts on Florence in the 15th century

The Medici family are synonymous with Florence and with the birth of renaissance art. Rising to power in the early 1400s, thanks to the enormous wealth of their international banking network, they were effectively the rulers of the Florentine republic. They were also amongst the most influential statesmen in Italy, until political upheavals and the collapse of the Medici bank in the 1490s led to their downfall and temporary exile.

The heyday of the Medici family in the fifteenth century coincided with some of the most ground breaking artistic developments of the renaissance period. The family were swift to recognise the value of art as propaganda, harnessing the skills of the greatest artists of the day to reflect their status and prestige, as well as to beautify their city. Focusing on the era of the early Medici, we shall explore the monuments, churches and museums of Florence, looking at some of the masterpieces created for successive generations of the family.

The founder of the family fortunes was undoubtedly one Giovanni di Bicci, a shrewd member of the Guild of Moneychangers whose luck it was to gain the post of papal banker to the anti-Pope, John XXIII. Despite this prelate’s questionable entitlement to his papal role, the connection between the family and the papacy was established, continuing almost to the end of the century. On this foundation was built a web of connections which allowed Giovanni’s son, Cosimo the Elder, to consolidate the family’s political and economic power at home and abroad. There now began a golden age of artistic and humanist patronage, continued by Cosimo’s son, Piero ‘the Gouty’ and into a fourth generation under his son, Lorenzo ‘the Magnificent’.

The list of the architects, sculptors and painters employed by the family is astounding. So too is the variety of buildings in and around Florence which either they directly funded, or contributed to in some fashion. These include Brunelleschi’s Old Sacristy at San Lorenzo – a family mausoleum; Fra Angelico’s mystical frescoes at San Marco, the friary funded by Cosimo for the salvation of his soul; the Medici Palace, the first domestic building to revive classical forms with Benozzo Gozzoli’s jewel-like chapel of the Magi within; Donatello’s bronze statue of David, which once graced its courtyard; and Botticelli’s lyrical mythological paintings The Birth of Venus and Primavera. These are just a handful of the masterpieces that we shall encounter on this five-day visit, specifically designed to bring some of the best-loved works of the renaissance into sharp relief.

The visit will be led by Paula Nuttall, one of the acknowledged experts on Florence in the fifteenth century and the author of several acclaimed books and exhibition catalogues. We stay at the 4* Hotel Degli Orafi, ideally and dramatically set by the banks of the River Arno in central Florence. The hotel is well known worldwide as the setting for James Ivory’s film ‘A Room with a View’, based on E.M. Forster’s evocative novel.