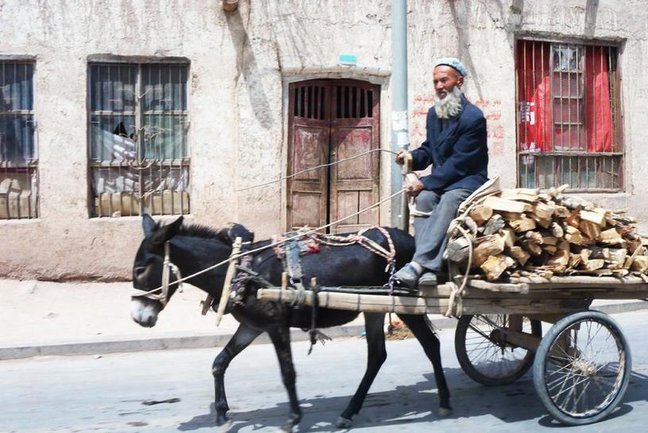 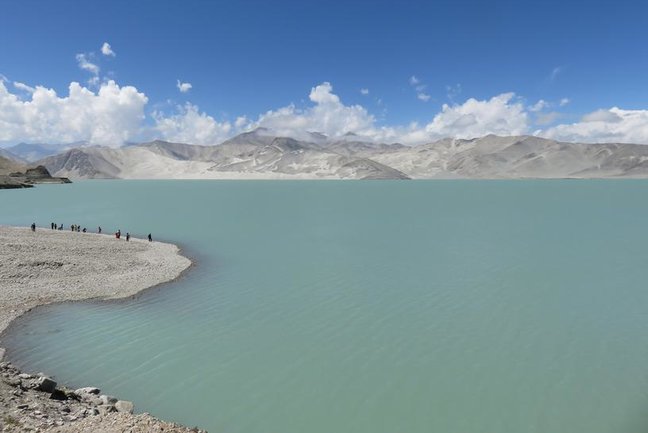 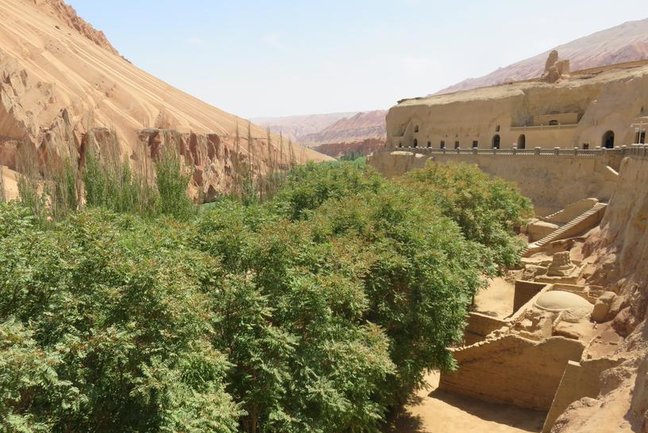 Find out more about the China - Forgotten Cities of the

Visit the far west of China to witness diverse cultures and awe-inspiring deserts, explore forgotten cities and learn about its fascinating history. We visit the renowned Sunday market at Kashgar, travel to Lake Karakul amidst stunning scenery and uncover the Buddhist heritage that played such an important role in the history of the Silk Road.

Day 1 – Urumqi
Arrive in Urumqi and transfer to your hotel. Depending on your time of arrival, you may have the opportunity to explore the city. In the evening share a welcome dinner with the rest of your group. Overnight at Yilite Hotel or similar. (D)

Urumqi
Urumqi is the largest city in Xinjiang, and is populated mainly by Han Chinese, in defiance of its geographical location and in accordance with China’s policy of encouraging the Han to migrate to ethnic minority areas. It is famous for being the city that is furthest away from any ocean. Urumqi was originally established in the 7th century as a customs post, to collect taxes from the caravans traversing the Silk Road. In the first half of the twentieth century, following the end of the Qing dynasty, Xinjiang was ruled by a succession of warlords vying for power. Located far from central Chinese control which was wavering at that point, the region was destabilised for many years with various forces, including White Russians fleeing the terrors of Bolshevik rule fighting each other. Before the Second World War, Urumqi was occupied by Soviet troops who had come to help put down a local rebellion, staying until 1960

Day 2 – Urumqi - Jiayuguan
Visit nearby Tian Chi or Heavenly Lake which sits amidst spectacular mountains and take a boat ride across the lake. We then return to Urumqi and take a night train to Jiayuguan (Depart: 2111 Arrive: 1159 the next day (BLD)

Day 3 – Jiayuguan
On arrival in Jiayuguan we will head for the Wei-Jin tombs, with their excellent frescoes, which depict everyday life from the 3rd century. Overnight at Jiayuguan Hotel or similar. (LD)

Jiayuguan
Although it originally extended well beyond here, Jiayuguan has become famous as the terminus of the Great Wall, thanks to the construction of a fort – the “Last Pass under Heaven” – during the Ming Dynasty in 1372. Lying strategically between the Qilian and Mazong Mountains, it was vital as the last outpost of the empire, beyond which only the barbarians lived. The setting is dramatic, with a backdrop of snow-capped mountains and desert all around. It is easy to imagine the despair experienced by people who were sent into exile and whose poetic last thoughts are graffitied onto the Western gate

Day 4 – Jiayuguan- Dunhuang
This morning we will visit the iconic Jiayuguan Fort and the Overhanging Great Wall, a section of the Great Wall dating back originally to the 1500s. We will then transfer by road to the remote and impressive oasis town of Dunhuang. Overnight at Tianrun International Hotel or similar. (BLD)

Day 5 – Dunhuang
We will visit the Mogao Caves or Caves of the Thousand Buddahs, site of the first Buddhist temples in China, which contain splendid examples of ancient artwork. We then take a short camel ride among the dunes to visit the Singing Sand Mountain which is said to make a humming noise on occasions. The view across the sands is impressive and we will also see Crescent Moon Lake at the base of the dunes. Overnight at Dunhuang Tianrun Hotel or similar. (BLD)

The Mogao Grottoes
These breath-taking grottoes house some of the most impressive Buddhist murals and carvings in the world. The first cave was carved out and painted in AD 366 and for the next thousand years, Dunhuang was one of the main centres of Chinese Buddhism. During this time more than 492 caves were carved from the cliff face, featuring 2,415 coloured statues and murals covering an area of more than 45,000m². By the 14th century, trade along the Silk Road had dramatically decreased, having been replaced by the opening of sea routes from China to the Indian subcontinent and Europe. The cave complex at Dunhuang was sealed and abandoned, and remained virtually untouched for the next 600 years. By the turn of the 20th century it had been almost forgotten until a Taoist monk stumbled upon the hoard in 1907. He also found a hidden chamber packed full of ancient manuscripts, some of which were brought from India by Xuan Zang, the monk who introduced Buddhism to China. Today only a handful of caves are open to the public but these are sufficient to give an idea of the scale and artistic excellence of the carvings and murals.

Day 6 – Dunhuang- Turpan
After breakfast we will visit the interesting Dunhuang Museum before transferring to Liuyuan station to catch the train to Turpan (Depart 15:44 Arrive 19:26). On arrival you will transfer to your hotel. Overnight at Turpan Huozhou Hotel. (BL)

Turpan
The Turpan Depression is second only to the Dead Sea in Jordan as the lowest point on the Earth. Here the temperature can soar to an average of 40°C in the summer – hence its name 'Fiery Land'. Turpan is a pleasant small city, an oasis with wide streets, shaded by grape arbours. The surrounding area also has countless places of interest. The ancient cities of Gaocheng and Jiaohe were once important landmarks along the Silk Road and the temples, pagodas and courtyards are still distinguishable, even though they were abandoned over 700 years ago. The Emin Minaret is situated on the outskirts of town and from the top you can get a fabulous view of Turpan and the surrounding fields. The crop of choice in the area is grapes and the seedless white variety grown here are famous throughout the world. To provide irrigation the local people have devised a unique system of underground water channels which are fed from snowmelt.

Day 7 – Turpan
We will spend today visiting some of the many intriguing sites surrounding Turpan, including the Flaming Mountains, the ruins of the ancient city of Jiaohe, the 18th Century Emin Minaret and the Kerez irrigation system. Overnight at Turpan Huozhou Hotel or similar. (BLD)

Day 8 – Turpan- Kashgar
After the morning at leisure we transfer to the train station to catch the overnight train (Soft sleeper class) to Kashgar passing through the spectacular scenery of the Tian Shan Mountains (Depart 13:26 Arrive 06:54 the next day). (B)

Day 9 – Kashgar
On arrival in Kashgar you will begin a tour of some of the sights including the ancient city, Idkah Mosque and Abakh Hoja Mausoleum. Overnight at Qinibagh Hotel or similar. (LD)

Kashgar
Kashgar, known as Kashi to the Han Chinese, is located at the junction of several routes along the Silk Road. It has thus become a renowned and important trading centre for travellers arriving from Central Asia, Russia, India and Tibet. In contrast to Urumqi it remains overwhelmingly Moslem. Kashgar has ancient origins, with mentions of it in Chinese documents dating back to the 2nd century BC. At various times it has been a Buddhist and a Moslem city, often outside the control of China and sometimes claiming independence. It was not until the 18th century that it was paid any serious attention by the Qing dynasty, which reclaimed the city and built a garrison there. In more recent years it played an important role in the ‘Great Game’, the battle for colonial supremacy in Central Asia between the British and the Russians, with both powers maintaining consulates there. Kashgar is today mostly populated by the Uighur ethnic minority, and its most famous spectacle is its Sunday Market, with traders from all over Central Asia bringing their wares and livestock to fill the marketplaces. This is a great place to people watch and observe an event that has been happening for centuries, and is little changed today.

Day 10 – Kashgar Sunday Market
Kashgar’s Sunday Market is famed as the largest and most important trading centre in the region, with traders coming from surrounding countries such as Uzbekistan, Kyrgyzstan and Pakistan to sell their wares. We have a full day to take in the sights and sounds of this amazing spectacle. Before returning to your hotel you will stroll through the Grand Bazaar to take in the sights, sounds and smells. Overnight at Qinibagh Hotel or similar. (BD)

Day 11 – Lake Karakul- Tashkurgan
Today we drive along the famed Karakoram Highway, one of the most spectacular roads in the world, climbing to 4100m to Lake Karakul. This area is home to Kyrgyz people who live a semi nomadic lifestyle. Later we continue to Tashkurgan for the night. Overnight at Tashkurgan Crown Inn or similar. (BLD)

Lake Karakul
Lake Karakul lies at the foot of the Pamir Mountains and the spectacular 7546m Mount Muztagata. The surrounding peaks are covered with snow for much of the year, and the scenery is stunning, with the dramatic mountains reflected in the clear blue waters of the lake.

Kyrgyz people
The Kyrgyzs form one of China’s fifty five recognised ethnic groups, and are found mostly in the far west of the country. There are currently around 145,000 Kyrgyz in China and they follow Islam, with a small minority adhering to Tibetan Buddhist teachings. Traditionally they were nomadic, roaming between Russia, China and Central Asia, and many families still live a semi-nomadic lifestyle today, taking their yurts and animals in search of fresh pastures.

Day 12 – Tashkurgan - Kashgar
This morning you will visit the Stone Fort on the edge of the town and afterwards descend to the beautiful Golden Grasslands, an area of wetland with a backdrop of surrounding mountains. Later we will return along the Karakorum Highway to Kashgar. Overnight at Qinibagh Hotel or similar. (BL)

Day 13 – Urumqi
The morning will be at leisure before you transfer to the airport for an early afternoon flight across the Taklamakan Desert to Urumqi. On arrival you will be transferred to your hotel. Overnight at Yilite Hotel or similar. (B)

Day 14 – Urumqi- Airport
The tour ends with a transfer to the airport. (B)